The European Seniors Team Championship was held on 3-11th May in Olympus region, Greece. This was a good opportunity to arrange an interview with Mr. Almog Burstein, ECU Board Member and Chief Arbiter of the Championship.

Q: Mr.Burstein, you are the chief arbiter of the European Seniors Team Championship. What are your impressions about this event?

A: It is very pleasant to be the chief arbiter in a tournament of seniors, because most of them came here to enjoy the atmosphere and the resort, and they don’t complain much… It is much easier to be an arbiter in such a tournament, in comparison with the “professional” championships.

Q: So you didn’t have a very challenging job to do?

A: There were some legitimate requests, to make some small improvements in the tournament, but overall the work was not very demanding.

Q: You are also in charge of the Seniors’ chess within the European Chess Union. What are your duties in this domain?

A: Yes, I was nominated by the former President Boris Kutin six months before the elections. My duties are to promote seniors’ chess in Europe, to help in providing sponsors for the seniors’ events and to improve the conditions for chess for veterans. Honestly, for now we didn’t achieve that much, but I am preparing a program in this direction and I hope to see the implementation soon. 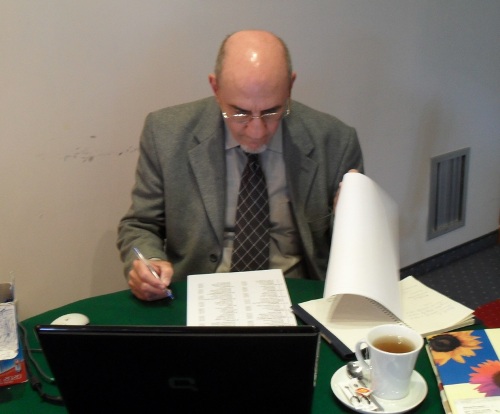 Almog Burstein as the Chief Arbiter

Q: You are also the Treasurer and Board Member of the ECU. What are the first results of the new administration? How do you see, from an insider point of view, the work and the atmosphere within the new Board?

A: For the first few months after the elections we were busy with transferring the ECU office from Berlin to Belgrade and the bank account from Berlin to Switzerland. Now we are actively working on the programs for the development of chess in Europe. Sava and Vladimir are doing a great job in the office in Belgrade. The flow of information from the office to all federations is improving all the time.

Q: Is this the first major ECU event in Israel?

A: Last time that we organized a big European event was the European Team Championship back in 1989.

Q: Do you think that now, after the ECC in Eilat, there will be greater activity in Israel in regard to the ECU events?

A: Certainly. We are also interested in organizing the European Youth Championships in the future, and possibly one of the senior and amateur championships. We are definitely hoping to strengthen the relations between the Israeli Chess Federation and the ECU.

Q: As a Treasurer of the ECU, can you tell us what is the financial status of the Union? Have you noted anything extraordinary, is there a plus or minus…?

A: The financial situation is quite good. For this I must compliment and thank the former Treasurer, Mr. Kurt Gretener from Switzerland. He did a fantastic job supervising the financial flow and saving a lot of money for the ECU.

This is why I agreed to move the bank account to Switzerland, to be under Mr.Gretener’s day-to-day supervision, and not to Israel where I am residing. I didn’t even have to travel to Switzerland, everything can be done through the Internet and it saves a lot of expenses.

Q: We have heard from Mr.Yazici on several occasions that organizers of some of the earlier ECU events actually owe money to the Union. Can you clarify this situation?

A: We have some issues with few Federations that have collected ECU fees but didn’t transfer them on time. The most serious problem is with the organizers from Fermo in Italy, who hosted the European Youth Championship. The organizer was not the Italian Chess Federation but a private one.

Anyhow, we are going to sue him, in a joint effort with the Italian Chess Federation. Our lawyer already sent the first letters and we will continue this legal battle until the positive conclusion.

All the other issues are minor compared to Fermo, and usually after some time we manage to settle everything with the Federations concerned.

Q: What will be the future activities of the ECU Board?

A: We will have a Board meeting in July in Iasi, Romania, during the European Youth Team Championship. We are working on many new projects such as an insurance policy for seniors and all professional players.

We will discuss all these in July and then bring before the GA in Creta Maris.

The excursion to the mount Olympus on 8th May was a good opportunity to perform an interview with Mr. Theodoros Tsorbatzoglou, head of the Organizing Committee and ECU Board Member.

Q: Mr. Tsorbatzoglou, what are your impressions from the European Seniors Teams Championship?

A: It is a very nice event, ongoing in a friendly and sporty atmosphere. We are really impressed with the seniors’ chess and this is one of the best tournaments we have ever organized. Our guests from 20 countries are very satisfied, they enjoy the place, the nature and the games. 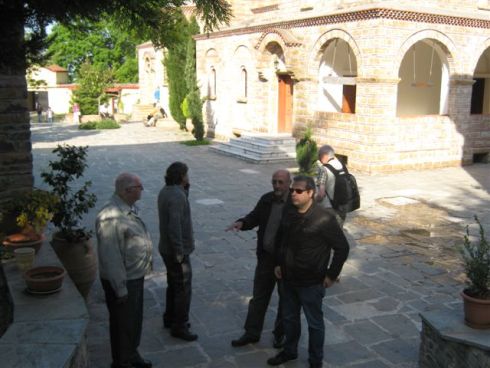 Visit to the Agios Dionisios Monastery, near Litochoro

We combined the event with two historical tours in Thessaloniki and Olympus and this was something exceptional for the participants. Another innovation is that we have converted the hotel’s main lobby bar into a chess café, placing 20 boards in the area. In this way, the participants can play chess whole day, analyze and have fun with their colleagues.

Q: What are the news from the European Chess Union?

A: ECU has to move and act in the general crisis environment that affects Europe. The crisis in Europe is not only a financial crisis, it is also a political and social crisis. Silvio Danailov and his team is a new administration that needs time to apply the program and give a new profile to the European Chess Federation.

Q: And what are your thoughts and actions as a Board member?

A: I was elected for the Board as an individual candidate. My role is to propose, ask, vote on proposals and contribute to the organization management when I am asked for. The two Board meetings that we had until now were constructive and compositive.

My personal wish now is to travel to all European countries and speak with the chess family, write down the existing situation and make a study about European chess and how we can connect all pieces into a creative sports’ plan. I have already visited some countries and I scheduled more visits, which I might also combine with participation in the tournaments. 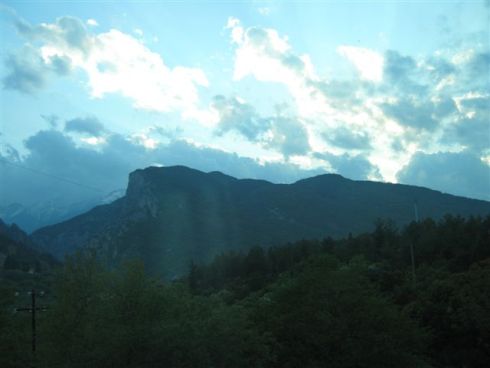 The skies above Olympus

Q: What are the news from the FIDE Committees?

A: After the changes applied in the structure of FIDE Committees, the operation became much better and efficient. Trainers’ Committee and Arbiters’ Committee are excellent examples for a long time already. In the recent period we see a real booming of action in the FIDE School Committee.

Now, in an area where I am also involved, FIDE Events’ Committee, we have progressive proposals in order to justify the events, the bidding procedures and regulations with the modern needs and sports’ guidelines. As I have already said, we are now acting in a difficult political and financial environment, the resources are limited, so we need to work and bring the results. We don’t need theories, we can’t waste time.

Q: What is the next event in Thessaloniki?

A: The only certain event is the traditional Open “Alexander the Great”, held annually, but as we now have a new elected Mayor and a new administration in Thessaloniki, there will be a new tourist strategical plan for the promotion of the City for the coming years. Our vision is to see some of the biggest world chess events in this city in the future. 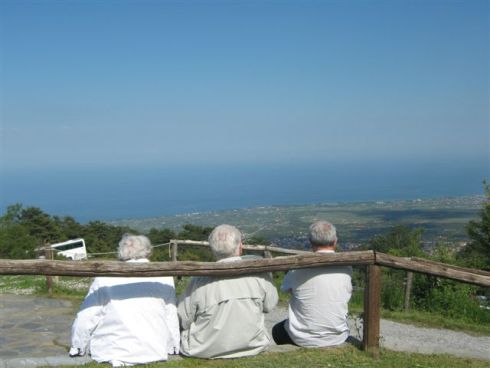 Interview about the tiebreak 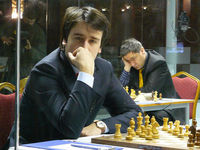 Q: The victory was very close. How much were you influenced by the incident with the clock?

A: I try to remain calm. Indeed, I was 5-10 seconds away from the next round, but now what to think about this? In the first blitz game I was successful, it really lifted my spirit, the second game was also developing in my favor. Well, you know what happened next.

Q: This worked in favour of the opponent?

A: With all due respect to Kramnik, this incident was more in his favor than in mine. One can argue on this subject. I think I had done everything that depended on me, I cannot say that I played badly, moreover I felt the victory is close, just no luck. After the incident I immediately remembered the footage of basketball finals at the Seoul Olympics, when USSR beat USA with a direct hit in the last second. In sport, anything can happen.

Q: You have been preparing for the Candidates for the last six months. Do you now feel that the time is wasted?

A: I have no regrets. What could I do? Today, a broken clock, tomorrow a chandelier will drop.

Q: Speaking of the supporting team, who were your assistants?

A: I would prefer not to disclose this and have it remain a mystery. I can only mention GM Igor Nataf with whom I worked for a long time.

Q: What is expected from semi-finals?

A: Now we have a somewhat unusual situation. For example, Kramnik might have expected to meet Aronian, but now he will face his compatriot Grischuk. Gelfand was probably thinking of Topalov, but he will now play against Kamsky. Their teams will probably have to make special preparation.

Interview in Russian in Azerisport

Topalov and Danailov on the Candidates matches 2011

Veselin Topalov and his manager Silvio Danailov gave an extensive interview for the National TV before the Candidates Matches 2011. The interview was taken in the city of Sandanski (in south Bulgaria) where Topalov conducted his final preparation for the matches.

Veselin Topalov shared that he expects the Candidates Matches to be a very difficult and long tournament. He is concentrating only on the first match for now, as his last match against Kamsky in Sofia was very balanced, while Topalov clearly states that “Kamsky is much better now than a few years ago”.

Topalov did not reveal all his seconds, but confirmed the usual suspects Cheparinov and L’Ami are in the team.

Asked about the refusal of Carlsen to play, Topalov said, “The FIDE World Championship system is not perfect, but it is clearly better than in previous years. That is why Carlsen did not have any right to refuse playing and to criticise the system.”

Silvio Danailov explained that the first match with Kamsky is the most important, as it will set the psychological path for the rest of the tournament. Danailov was happy that the Russian players are in the other part of the brackets and can only meet Topalov at the final, and said with a smile, “Kazan can be the revenge for Elista.”