Who is Arkady Dvorkovich plus interview by Gazeta.ru

Was there a possibility to have the meeting of the Board in one place?

I am sure that there is a chance for consolidation, but it needs caring for chess and not following personal interests.

Can we speak about a split in the leadership in the Russian chess under the circumstances?

First, the colleagues do have contradictions on a number of issues. Second, they have dual information, which is explained by non-fulfillment of my decisions. This situation is for the first and last time. We shall reach consolidation, otherwise the Federation will not be able to perform its functions, thus damaging chess development. We should forget our hurt feelings, we want to work constructively.

Are you ready to respond to the reasoning of A. Karpov in respect of the today’s state of chess in Russia and the world?

Yes, I am. In the last years, we have done the minimum of what is necessary, and chess is not now in order. There will be serious changes in politics, and the decision on the candidacy of K. Ilyumzhinov was taken based on the discussions with him and his team of necessary changes. And he is ready for them. There is a draft programme which shall be announced in the nearest future and will find support in chess society. The system of administration, including on a personal level, needs changes. Professional chess does not have enough sponsors, but our work during the last month showed what can be changed under the conditions mentioned by me.

Karpov also accused RCF that it does not pay attention that his candidacy is supported by large national federations.

– Everything will be decided at the GA of FIDE in September in Khanty-Mansiysk and we shall know who voted for who. I am ready to believe that many Federations will support Anatoly for his authority in the world. But Kirsan is a more authoritative figure in the chess world, if you take all FIDE membership as a whole. It is not acceptable for any chess functionary to say that any specific country is more important than the other. All countries should be equal for him.

Will it be strange for you if Karpov shall run from another country?

Yes, it will be strange for me. I personally shall not be against, and shall call on my colleagues not to object, if Mr. Karpov shall run from another Federation. This is my opinion. Although according to the FIDE Statutes, a Federation can do it. And this case there will be minimum 2 candidates. Besides them, we do not see anybody else so far.

My position is to have several candidates not one..

There is not much time for the solution of the Russian CF situation and consolidation of its members, as the deadline for the FIDE Presidential candidates is 20 June. Dvorkovich said that “in the next couple of days we think we shall register the Federation’s statutes, which shall make our meetings legitimate. After that the Supervisory Board shall meet. We look forward to the understanding of our colleagues, that they will put common interests higher than their personal hurt feelings. We calculate that the Statutes can be registered by the end of next week. I think we will need two more weeks to organize another meeting. As we publish the materials of the Agenda of the Board to media, they will demand the discussions in these two weeks. I.e. we we will be on time with our decisions. The official candidate has been named – it is Kirsan, although colleagues think it is not legitimate.

(Text of the interview in Russian)

More on the topic 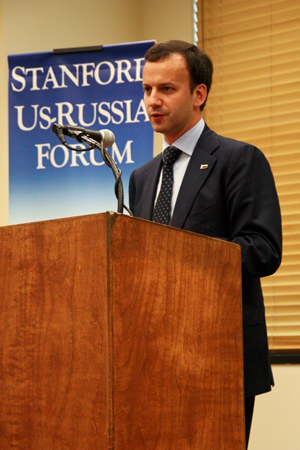 Who is Arkady Dvorkovich

Arkady Dvorkovich is a Russian economist, Assistant to the President of the Russian Federation since 13 May 2008. His father, Vladimir Dvorkovich, was an international chess arbiter.

Since May 13, 2008, Dvorkovich is Assistant to the President of the Russian Federation.

Savvy international investors know that in the past two years the government of Vladimir V. Putin has been pushing a sweeping package of measures that aims to kick-start Russia’s economy — by cutting taxes, slashing bureaucracy, and injecting competition into moribund industries. And they know about Russia’s new 13% flat tax, which has proved surprisingly effective in raising revenue for the government.

But investors may not know the man most responsible for Russia’s fiscal overhaul. That honor goes to Arkady V. Dvorkovich, 31, a deputy minister in Russia’s Ministry for Economic Development & Trade (known as the economy ministry). An economist with a master’s degree from Duke University as well as Moscow’s New Economic School, Dvorkovich earned his stripes by serving as personal adviser to German O. Gref, the Economy Minister, in 2000-01, helping him to craft President Putin’s reform program. An expert in public finance, he still oversees tax issues as deputy minister under Gref. In that role, Dvorkovich wants to trim payroll taxes to 30% from the current 35.6%, abolish the 5% sales tax, and slash the value-added tax to 16% from 20%.

But his brief extends well beyond taxes. Fluent in English, Dvorkovich has become one of Russia’s most prominent international voices on economic policy. Thanks in large part to his influence, the economy ministry has replaced the finance ministry as the driver of economic reform. Dvorkovich is sure to play a big role as Russia tackles the next batch of reforms, including overhauls of the banking and pension systems. “He’s one of the best young technocrats in Russia,” says Roland Nash, head of research at Moscow investment bank Renaissance Capital.

Dvorkovich has been serving the Russian government since 1994, when he landed a job at Moscow’s Economic Expert Group, a think tank that advises the finance ministry. There, he so impressed Russia’s economic policymaking Establishment that he was promoted to director in 1997.

Of course, the Moscow native could have made a lot more money in investment banking — and friends predict he’ll eventually join the private sector. But for now, he’s having too much fun in government. He recently slammed his superiors in the Cabinet for watering down a plan to cut the bureaucracy. President Putin then echoed the same criticisms in a state-of-the-nation address. Dvorkovich’s reformist ideas are clearly getting through to the Kremlin.

(Original article by The Stanford daily)

Arkady Dvorkovich, the chief economic advisor to Russian President Dmitry Medvedev, spoke Wednesday at Arrillaga Alumni Center about the need for economic modernization in the Russian Federation in the post-Cold War era.

Until the global financial crisis hit, “we were sleeping too much on our natural resources, oil and gas, without thinking too much about the future,” Dvorkovich said.

“Russia has potential to grow,” he said, “and the crisis came at the right time to the right place. The gap between Russia and the rest of the world will increase if we do not succeed right now.”

The address served as the keynote speech for the first annual conference of the Stanford U.S.-Russia Forum (SURF), an event aimed at improving U.S.-Russia relations by focusing on youth.

“SURF is an initiative to bring together students from across the U.S. and Russia to explore the most pressing global challenges facing our respective countries,” said co-founder Sam Stone ’10.

Dvorkovich, who got a master’s degree at Duke University, now designs policies intended to instigate innovation and modernization in the Russian economy. He said the government has been successful in fostering a new mood in Russia that is conducive to innovation.

“What we are trying to do now is to gather as many partners as possible in our endeavors,” he added.

He highlighted efforts at creating innovation in the energy sector as a crucial aspect of his work. Oil and gas companies, including Gazprom, and steel-making corporations serve as some of the hotspots for collaboration in these endeavors.

“Russia is not the Soviet Union,” Dvorkovich proclaimed in an effort to debunk claims that Russia is reverting to authoritarian leadership.

“The president is focusing on feedback consistently coming from the people. He has his own blog and looks for feedback on the Internet everyday,” he said.

Though he did not dwell on the criticisms against the Russian government, he did highlight his belief that Russia is staying away from an authoritarian leadership.

“We are not going to create a closed society,” he said. “My hope is that any Russian can go abroad if he wants to go abroad.”

Discussing the corruption that often plagues public works funding, he said former President Vladimir Putin’s early efforts at minimizing the role of bureaucracy to combat corruption largely failed, and hopes that this new set of priorities will serve to further eradicate corruption.

“I was impressed with how candid he was with respect to the problems Russia is facing, particularly corruption,” said Mikael Bernstein ’12, who works as a deputy director for SURF.

“I expected him to be much more diplomatic and appreciated his honesty,” added co-founder Anda Gansca ’11. “He also came off as pretty optimistic with respect to Russia’s future.”

Dvorkovich said the increase in educational exchanges between the United States and Russia serves as a crucial factor in improving the two countries’ relationship. He is working with Stanford and M.I.T. to organize educational exchanges for post-doctoral students to further cultural dialogue.

“The future depends on young people, which is why education and this SURF project in particular is crucial,” he said.