No one is bigger than chess 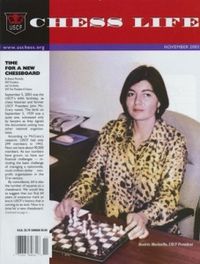 The same week, I received a letter from FIDE President, Kirsan Ilyumzhinov inviting me to be part of his electoral ticket. When I meet with Mr. Henley, he offered to appoint me as FIDE Vice President in Mr. Karpov’s Presidential Board and compensation for actively campaigning.

After carefully reviewing the situation, I considered that FIDE President Kirsan Ilyumzhinov was the best candidate as FIDE President, and I was highly supportive of his team as well.

I did not think that Former World Champions Anatoly Karpov and Garry Kasparov, both great players and important members of our community, were the best people to run FIDE.

In the past they were both chess enemies, and I considered how this could create potential issues between them, in case that GM Anatoly Karpov became FIDE President. I also thought, that their motivations were not in the best interest of FIDE and GM Karpov was lacking the necessary experience to run an organization such as FIDE.
Something just didn’t quite fit or feel right about this situation and I held firm in this belief.

Additionally, I also did not wish to divide the Americas, since we have been working for 10 years in building a block in the American Continents.

During this time it also became clear that the Karpov team was going to try to split the continent by dividing the Americas in hopes of gaining ground in that region.

My vision is for a united chess community, which is best represented by Mr. Ilyumzhinov’s Ticket and his team.

Once I made the decision, I asked the U.S. Chess Federation’s Executive Board for a meeting, innocently I also included Michael Khodarkovsky as FIDE Delegate to join us in a conference call.

At the conference call, all members of the board (5) were present: President, Jim Berry; Vice President, Ruth Haring; VP of Finances, Randy Bauer; Members at Large, Michael Atkins and Bill Goichberg.

Mr. Goichberg is a former U.S. Chess Federation President and the main tournament organizer in the United States. Mr. Goichberg is very anti-FIDE and especially very anti-Kirsan Ilyumzhinov. I presented the situation to the Executive Board, Mr. Bauer got disconnected from the conference call, so he did not hear everything and did not vote. However, the Board took an unofficial vote. Mr. Berry and Ms. Haring voted ‘Yes’ to endorse me as a candidate in Mr. Ilyumzhinov’s ticket, Mr. Atkin said that he did not know enough, but was initially agreeable to support me, but decided to abstain, and Mr. Goichberg voted ‘No’ to my endorsement.

Acting on Mr. Khodarkovsky’s advice the Board postponed the meeting for two days later. At the time, I did not know that Mr. Kasparov was the person running the campaign for Mr. Karpov and Mr. Khodarkovsky clearly had a conflict of interest, since he works for the Kasparov Chess Foundation and he is also serving as USA FIDE Delegate.

During those two days, Grandmaster Kasparov and Grandmaster Henley made several phone calls asking the Board members not to endorse me in order to prevent me from joining Kirsan’s ticket and to only support Mr. Karpov. He even called a very influential person in U.S. Chess, who is also a major sponsor of the U.S. Chess Federation.

This whole situation reminded me of the 1994 Presidential FIDE Election, when the U.S. FIDE Delegate was Mr. Fan Adams and in a meeting held prior to the Chess Congress in Moscow, the U.S. Chess Federation decided to support the candidacy of Mr. Kouatly, but then after GM Kasparov’s phone calls to members of the U.S. Chess Federation’s Board, the United States changed their position at the last minute in favor of FIDE President Mr. Campomanes, resulting in the resignation of Mr. Adams. Back then, many promises were made but nothing happen in the end.

Now, back to March, 2010, two days after we had a conference call, we met again over the phone with the members of the Federation’s Executive Board, Mr. Khodarkovsky and GM Henley. Karpov’s team made a new offer to me in exchange for me not accepting Kirsan Ilyumzhinov’s invitation to be a member of his electoral ticket. The offer was an appointment in GM Karpov’s Presidential Board (in the event that he won the election) and full support to become Continental President. In addition they would not require that I campaign on behalf of Mr. Karpov.

I told them that I would not accept the offer. One hour later, Bill Hall, USCF Executive Director and Ms. Haring called me to tell me that I should accept the offer or else they would not endorse me and that they would even remove me as Zonal President.
By then it became clear that I was dealing with a very undemocratic organization, and the way in which they were pressuring me and trying to force me to accept Karpov’s offer by use of threats, convinced me more than ever that I was making the right decision.

I did not accept the offer, the board did not remove me as Zonal President, but the U.S. Chess Federation sent me a letter denying me the endorsement and making a statement that they would not support anyone who is on Mr. Ilyumzhinov’s ticket.

Fortunately, the National Federations of Chile and Brazil gave me an endorsement since I am also a member of these Federations.

Who is Beatriz Marinello

From a very early age I came to the realization that I wanted chess to be a very important part of my life and have since dedicated my life to chess for the past 33 years. From the beginning I knew that the opportunities for chess players, especially women in chess were extremely limited. For this reason, I have dedicated most of my life to the development and promotion of chess, acting in different capacities.

I was born in Chile and have resided in the USA for about 20 years. I love both countries, but consider myself a citizen of the world.

My chess career began in 1979 when I started playing chess at Club Chile in the city of Santiago. The first time I won the Chilean Women’s Championship was in 1981, and I won this championship every year from 1984-1989.

Although, my home Federation is the United States, I have strong ties to Chile, and I remain an active member of the Chilean chess community, as well as other Nations in the American Continent (from Canada to Chile) where in my capacity as the General Secretary of FIDE America, I have the opportunity to assist in many of the chess activities taking place in this part of the world.

Most of my involvement in U.S. Chess has been as a chess promoter, scholastic chess and in leadership roles. I have been instrumental in the development of scholastic chess in the United States, and I worked for the U.S. Chess Federation from 1997-2000 as a National Scholastic Director.

Eventually, I became President of the U.S. Chess Federation (2003-2005), and I have been a member and currently Co-Chair of the Scholastic Chess Council . Currently, I am the Zonal President of Zone 2.1. (USA).

In 2008, I was awarded Chess Educator of the Year (UTD), where I also received acknowledgement for my dedication to chess and education. I focused on “chess and the development of social skills for at-risk-children”, which I strongly believe in and is a primary concern for me as I promote chess in the global chess community.

“Marinello has a long list of credits in establishing scholastic chess programs in New York City and has devoted many years to chess education for the U.S. Chess Federation (USCF). In 2003 she became the first woman president of the USCF after serving as that organization’s National Scholastic Director.”

“She has been important for the USCF not only in chess education but in overall leadership,” said Stallings, Director of the UTD Chess Program. “Ms. Marinello is also quite an accomplished tournament player. In fact, she became National Women’s Champion of Chile when she was 16 years old.”

As I mentioned, I had offers to collaborate with both candidates for FIDE President. I have great respect for the top players, especially our former World Champions.

I hoped from the beginning that these campaigns would concentrate on presenting the best programs and that they would focus on their contributions for chess development and promotion stressing their position on what each candidate and team could offer.

I do not believe in negative campaigning, and although I am very disappointed with my home federation (USA) for not supporting me, I will not attack or do anything that can damage the U.S. Chess Federation or any other chess organization for that matter.

Resorting to such tactics is against the very thing we are trying to do in the “One World. One Vision.” campaign and it is against everything I have done to promote chess on a National and International level.

I will not stoop to our opponents level by using the methods they have implemented from the beginning of this election which are harmful to the global chess community. I will simply tell my story as it occurred.