Danailov shares details about the case 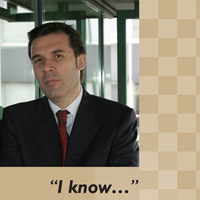 The slogan of Danailov’s campaign

During the Anand – Topalov WCC 2010, a message appeared on the official site stating, “Warning! It is absolutely prohibited the live broadcast of the moves or video during the game on other websites, media or software without the explicit permission of the organizers of the match. This prohibition is being violated by ChessBase”

A few weeks after the end of the championship Chessdom.com received news directly from a German source that the case is already presented in court. Regarding the moves copyright case and the recent exchange of media releases between teams Topalov and Anand, we contacted the manager of Veselin Topalov and one of the central figures behind the organization of the WCC – Silvio Danailov. He was disturbed by the fact that millions of euros were invested in the most watched online World chess championship in history, while Chessbase is putting themselves above the law and taking the moves without permission. Read on for full details:

Q: Mr. Danailov, we understood that the case against a German company that has presumably violated copyright rules has been presented in court. Can you share with us details on the issue?

A: Good afternoon, yes, this is true. Before the start of the World Chess Championship we explicitly stated that no company can use the moves without the official site’s staff permission. And this was violated by Chessbase, they put themselves above the law in Europe, above the general FIDE ethical rules.

Q: Until now there is no such similar case in chess history. Do you believe it will be successful?

A: I believe in European law and in our Attorney who is presenting the case – Mr. Rainer Polzin. What’s more, I am candidate for President of the ECU and as such I have to stand behind the rights of professional chess. Such actions, as the one by the German company Chessbase, affect the sponsors of events negatively, which damages sponsorship, from there future organization and level of events. In the long run the biggest damage is made on the chess fans, who are the most important part of the game – they certainly deserve to enjoy high level events and have chess sponsorship on all levels.

Thus, by defending our rights through European law, we will be defending all fans and the future of chess.

Q: Our information states that the case entered court on May 27th, that is way after the end of the event. Why was it not presented after the first rounds?

A: In such proceedings there are steps to follow. We tried to reach an agreement with Chessbase and offered them to follow the rules all other sites were following – a commercial contract. They refused and started transmitting the games. A warning letter was sent to them after the first games, requesting immediate stop of broadcast. But such action was not taken from their side, so the case is now in court.

Everything is very technical and there are many details. In the modern age of communications this process is easy to trace, the amount of work is big though.

This was the most watched chess championship online in Internet in the history of all championships. For all this to happen the sponsors paid, but Chessbase can take the moves for free, and resell to their clients ? This is not normal, by law and by human norms. In simple language this is robbery. And for such actions there will be consequences.

Q: As we mention the World Chess Championship, the last interview that we had a few days ago reached mainstream media in many countries including India. The manager of Anand, Mrs. Aruna Anand, answered in TOI before we had the chance to talk to her.

A: First of all let me clarify one thing: with all my respect Mrs. Anand is not a manager, she is a secretary. Manager is a very serious profession, the manager promotes and popularises chess , looking for sponsorship money and organizing world class events. Basically what she is doing is pick up the phone, send emails, faxes, booking tickets, etc.

About her reaction, it looks to me a little bit nervous, but what to do, the truth hurts sometimes.