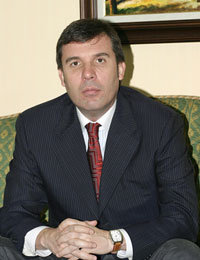 Q: Mr.Danailov, in a recent interview Viswanathan Anand commented that besides the known seconds (Nielsen, Kasimdzhanov, Wojtaszek, and Ganguly) he had additional helpers for the match in Sofia (Kasparov, Kramnik, and Carlsen ). Did this surprise you?

A: Well, not very much. I know quite well Kasparov and our WC hero from Elista, they are both old fashioned. What really surprised me was that despite their so called super team, we were still much superior in the openings. Only in two games they showed some decent ideas. This was game 4 with white and game 12 with black when they succeeds to equalize the position quickly. The rest of the games our team totally dominated in the openings. Anand was suffering with black in all games (except the last one) and no advantage at all with white (except game 4). And I can tell you more: I will never exchange Cheparinov for all of these guys together. Cheparinov is much better and much more creative than Kasparov, Carlsen, etc.

Q: Viewing this, are you upset by the final result?

A: Not at all, I am very proud of Veselin and our team. Topalov played great, fighting and creative chess, under tremendous pressure, due to the fact everybody in Bulgaria was expecting his victory. I am proud as well from our trainers, Ivan Cheparinov , Erwin L’Ami, Jan Smeets and Jiri Dufek, they did wonderful job. I am also very proud from the Organization, our Federation gave clear example how to organize perfect WCC.

Topalov lost, this is sport, everything can happen. At least this match was one of the more exciting, chess wise, in the last 20 years. This was not Bonn, when after game 6 the match was over. Topalov lost, but he was attacking and was creative during the whole match. Anand was only defending, nothing more. Brilliant defence, by the way! But maybe the fans expect different way of play from the Champion, a more inspiring one…

Q: What about the Blue Gene with 8192 cores that you used?

A: About Blue Gene, what I can say is that everything is question of money. We invested huge amount of money on preparation, I do not want to mention the figure because someone can get heart attack. In any case Anand’s team could do the same, some money always brings strong preparation.

Q: Are you going to continue working with Blue Gene?

Q: Let’s speak about the rumors: according to local sources there is a rumor that Anand received extra 300 000 just to agree to play in Sofia. Is that true?

A: The rumor is not exactly true. It is true that their team has asked for this fee, but after negotiations they got only 100 000 eur extra money apart from the prize fund, all according to regulations. And still some people are trying to present Anand like a poor victim. I agree, maybe he is the victim, but not so poor after all….

Q: Ok, lets’ switch the topic. ECU elections are getting hot. There are already four candidates, and you are one of them. Can you comment the most recent candidate
Robert von Weizsäcker, who is supported by Kasparov and Karpov?

A: The fact that there are four candidates means that the ECU position is important for many people. I do not want to comment my opponents, I would like to speak with the facts. Only in the last 5 years I brought to chess more than 10 million eur in sponsorship – Mtel Masters tournaments, Grand Slam events, the FIDE World Chess Championship Mexico 2007, the Challengers match Kamsky – Topalov and FIDE World Championship Anand – Topalov. This is the reality, like it or not.

Q: Can you share some news, your program, names from the ticket?

A: Very soon I will announce interesting news, be patient. Stay tuned and follow my campaign at www.danailov-for-president.com

According to the initial match regulations, the prize fund minimums were as follows:

13.1 The prize fund of the match, provided by the organizer, should be a minimum of
1,000,000 (one million) euros, net of any applicable taxes. The prize fund will be divided .
60% for the winner and 40% to the loser if the FWCM ends within the 12 regular games. In
case the winner is decided by tie-break games, the winner shall receive 55% and the loser
45%

13.2 The organizer shall pay to FIDE an amount of 20% over and above the total prize fund,
net of any applicable taxes.

13.3 If the match is played in the country of one of the players, then the opponent shall
receive 100,000 (one hundred thousand) euros from the Prize Fund. The balance of the Prize
Fund shall then be shared in accordance to Article 13.1 above.

13.4 Before the start of the WCM, the players shall each receive 200,000 (two hundred
thousand) euros in accordance to the terms of the Contract to be signed with FIDE. This
amount shall be deducted from the Prize Fund. The balance of their share of the Prize Fund
shall be remitted to the players within ten days after the completion of the WCM.