Relaxed and happy after the prize awarding ceremony, Etienne Bacrot has agreed to answer our questions.

At the age of 25, and therefore the whole future ahead of him, Etienne for us is Björn Borg of French Chess. He wins the national championships as the Swede was dominating the tennis on his favourite surface.

According to the Live Top List, maintained by Hans Arild Runde, Etienne is now ranked as 30th player in the World with 2705,7 points. 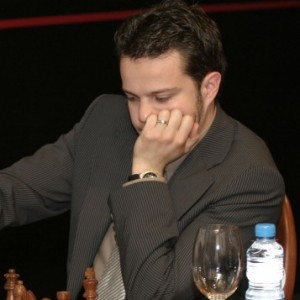 Q: Hello Etienne, we will start with personal questions to help our readers know you. What is your principal quality?

A: I am a Fighter. Defeat increases my enthusiasm!

Q: And your principal defect?

A: I make too many blunders in chess.

Q: When you do not play chess, what is your main occupation?

The greatest moments of his career

Q: Let us return to chess, what do you consider to be your best results?

A: French Championships in general and to have been in top-ten best players worldwide over the period of couple of years.

Q: Who are the strongest players against whom you’ve played?

A: I played against all the champions. I would mention my win against Vladimir Kramnik, in Dortmund 2005, but it is already old.

Q: Who are the players that you admire the most and why?

A: All the great Champions without exception. Each one has contributed something to the history of chess and the evolution of the game. 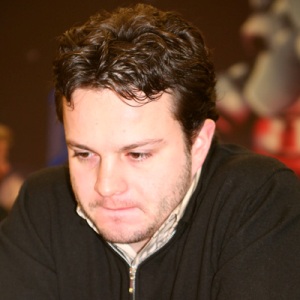 Q: What are the chess tournaments that you prefer?

A: Ultimatelly, the French Championship and Biel Chess Festival.

Q: How did you progress through the French Championship?

A: At the beginning, I made some inaccuracies, but without many consequences. Then I had to raise my level of play to follow Maxime Vachier-Lagrave. My game against Laurent Fressinet was a turning point.

Q: What are your future tournaments planned?

A: The Tal’s Blitz Cup in Moscow, if I get my visa Monday! (He wasn’t there, ed.note)

Q: And the Chess Olympiad in Dresden, in November 2008? 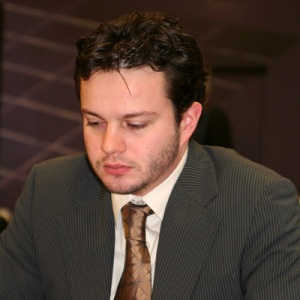 Secrets of the Champion

Q: What would you advice to our readers in order to progress in chess?

A: Personally, I have begun by playing a lot. Then I read all the books that exist!

Q: What is your approach to the game with white and with black pieces?

A: With white, I seek for the advantage, and with black, I now play more aggressive (since Biel) to fight for a win.

Q: Lastly, Etienne, what are your favorite books chess?

A: At the moment, I read “Chess Studies” of Kasparian. I appreciate all the books of John Nunn.

Q: Do you wish to add something to our interview?

A: I look sometimes at the Chess & Strategy website.

Thank you Etienne and congratulations for your 6th national title. We wish you all the best in your upcoming tournaments.