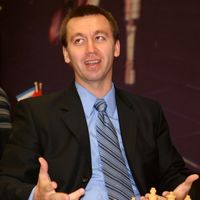 Tushiev: You are not a frequent participant in open tournaments, how did you decide to play in Baku Open?

Kamsky: Yes indeed, I rarely play in opens, I prefer round robin super-tournaments. But my friends are playing here in Baku and it is always a pleasure to be in such a good company. Besides, in a couple of weeks from now I will play in the European Club Cup for team “Alkaloid” from Skopje. Shakhriyar Mamedyarov, Gadir Guseinov and Rauf Mamedov are my team-mates there. So I came here to play together with my club partners and to have good time with my friends. Also Novkhany is a great place, very nice resort, so one can play and relax at the same time.

Tushiev: After losing the match against Veselin Topalov, your game appear to be in decline, already having an effect on your ranking. In particular, for the first time in a long run your elo rating went below 2700 …

Kamsky: Yes, this happened. Of course, the defeat in that match had a strong influence on my later game. But the drop in my play mostly had nothing to do with chess. There are several other reasons. But I hope that I can slowly regain earlier form, and a tournament like Baku Open can definitely help me move into the right direction.

Tushiev: You have mentioned team competitions, so I would like to point that early next year Azerbaijan team will have its debut in the World Team Championship, where USA can be one of their rivals…

Kamsky: Yes, but I will not play for the U.S. team at the World Team Championship. We have decided to give a chance to our young American players, so that they can obtain necessary experience. I should say that I myself have offered to give a chance and my seat to young boys. If it was a Chess Olympiad, then of course, I would be a part of the U.S. team, but the World Team Championship is not such important event. The juniors also need a competitive practice, so I will not play there.

Speaking of the chances of Azerbaijani team, it has always been very strong. I remember when your team first appeared at the official competitions, when it was composed of a very young Azerbaijani chess players, that even then they created quite some noise. So you have a very serious, and most important, young team. This is the way it should be done, to attract young and ambitious players.

Tushiev: It is possible that next year you will come to Azerbaijan again, as according to FIDE Deputy President Georgios Makropoulos, Baku has great chances to host Candidate Matches, in which you are already confirmed participant. How do you estimate chances of Baku to hold such a tournament?

Kamsky: Honestly, I don’t know. At the present time, everything in the chess world is changing quickly and drastically, so it’s difficult to predict anything. But I think that if Baku wins this bid, then the playing conditions will get even better, as Azerbaijan knows how to organize high-level chess competitions.