Hello Mr. Mastrokoukos! Only two weeks are left to the start of the European Team Chess Championship in Crete, Greece. How do you feel as being the host of such a major event?

Hello. Before anything else I would like to congratulate you for the website Chessdom.com which seems to make a real difference in the field of objective and reliable chess reporting. As for us being hosts of this great event, it is really an honourable task combined with great responsibilities. We have already organised in Creta Maris the World Youth Championships in 2002 and 2004, dealing with over 1600 guests in each event. Although the European Team Championships is an alternative kind of tournament, involving mostly top professional players rather than talented juniors, we are very optimistic that everything will be excellent and in accordance with our well known 5-star quality standards.

Seven of the top ten players will participate. Also many players 2700+ will be present. In the women section there are two ex world champions as well. What attracted the chess elite of Europe?

It is certain that national federations have acknowledged the importance of having all their top players represent their country in team competitions. I also believe that the positive image of Creta Maris Hotel from previous events helps the top players overcome any doubts about the quality of accomodation when playing for their teams. From the previous World Youth Championships, I still remember the article of the late IA Vladimir Dvorkovich describing the playing conditions in the Congress Center of Creta Maris as better than those of the …Kremlin halls(!) or famous GM Magnus Carlsen reporting in NIC that Creta Maris was the best hotel he ever visited! Such positive comments are always appreciated but at the same time it makes our responsibility, and the expectations of our guests, to grow even bigger!

Congress Center of Creta Maris,
where games of the ETCC 2007 will be played

What is the total prize fund of the European Team Chess Championship and how is it redistributed?

The European Team Championship is like an Olympiad: it’s a team event among national federations without individual prize funds. Each national federation has seperate financial agreements with its own players. For example our federation is paying each player about 3.000 euros, depending on rating. We also have similar payouts for the women’s team.

We know that no event happens without sponsors. Who are the major sponsors of the ETCC in Greece?

The main sponsor of the event is TEAB SA, the parent company of Creta Maris. It is a chain of luxury hotels and properties in Crete with total assets valued well above 200 million euros. We are grateful to Maris Hotels and its Chief Executive Officer, Mr Andreas Metaxas, for their continuous support!

Where will the players be accomodated?

All the players will be accomodated in the 5-star Creta Maris Hotel, next to the Creta Maris Congress Center where the games will be held. 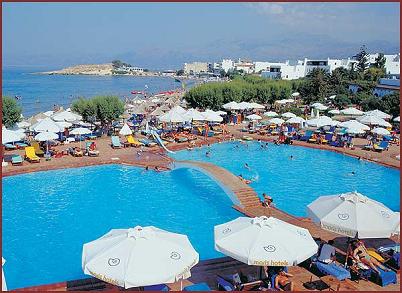 The swimming pool of the 5-star Creta Maris Hotel

It is very interesting to take a look at the carreer of a chess professional like yourself. Tell us a bit about your experience as a chess player.

My “career”, let’s say, as a chess player began quite late in 1984-85 when my family moved back to Athens from Toronto, Canada. At that time I learned how to move the pieces from a friend whom I met in an amateur football club. Although I was already 13 years old, my chess development fortunately accelerated and by 1991 I had my first IM norms. By 1994 I was already No. 5 in Greece and managed to beat many famous GMs of that time such as Inkiov, Kotronias, Murey, Grivas, etc. During that period I was also invited and played for the Greek National Team, when our coach was the Russian IM Nikolay Andrianov. After 1995 I spent less time playing chess and my actual strength has been declining. But I still participate in some tournaments, it’s always fun!

How did you decide to become an organizer of chess events?

It all began in 1993-95 when the EU and the Greek government began supporting international sport events in Crete, through a mutually funded EU program, in order to diversify the sources of incoming tourism. At that time we formed an entity with my close friend Aggelos Tzermiadianos and staged various chess tournaments in Crete with prize funds of 10 to 20 thousand dollars (that time there were no euros!). We even organised an international …wrestling event for the Greek Wrestling Federation in 1997! Since then, organising events has been an important part of my chess life.

How will the ETCC affect chess in Greece and the region?

Greece and the Balkan region are already enjoying a huge chess development. Greece has recently emerged as one of the 20-25 top chess countries in the world, former Yugoslavia has a long and outstanding chess tradition while Bulgaria has produced in the same year two World Champions (Topalov and Stefanova). Now Turkey is also developing fast with strong support from their government and they will definitely come up with great players very soon. So the ETCC itself will mostly help Greece, in terms of further promotion of our sport, as all the major newspapers nationwide and other media in Crete will be covering this event. Another main goal of the ETCC 2007 is to affect positively the European Chess Union and the conditions on which other ECU events shall be awarded in the future.

Thank you for the interview!

Thank you too, it was my honor to answer your questions.