A step forward for European Chess 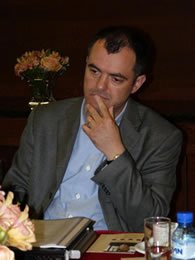 How did you become a member of Silvio Danailov’s ticket?

I think that the way I became a member of Silvio Danailov’s ticket is a very good example of how a relation in the field of chess could start and evolved. The first occasion when I met with Silvio was in 2006 for the match between Veselin Topalov and Dieter Nisipeanu, who were at that moment World Champion and European Champion respectively. I was impressed by Silvio’s attitude as a manager of the World Champion when preparing the match and afterwards during the match. It was really a big pleasure for me to received as guests in Romania two personalities of the modern chess: Veselin Topalov and Silvio Danailov. After this first meeting, we continued to stay in touch and despite Silvio’s busy schedule he always finds time to share to me some of his thoughts and experience.

Having in mind the good cooperation between Romanian and Bulgarian chess federations, we both considered that we could do a good job together in the ECU board.

What is your experience related with this kind of organizations as European Chess Union?

I would say that I have more than a decade experience of being an active member of leading national professional organizations (in wine sector), with activity in European wine associations as well. During the last four years I attend at the meetings of ECU and FIDE and for example, based on my experience, the last year I had some contribution in elaborating the amendments for the statutes of ECU.

You led the Romanian Chess Federation for 4 years. What are some of your achievements?

In our federation it was needed a total reconstruction. Chess lovers can remember some strange facts that happened in the past. There was a great support from our members for a new start and we succeeded in some directions as: almost doubling of the rated competitions in our country, doubling of the registered (active) players, many closed and open tournaments with a certain regional importance. We were interested to develop a good foreign relations, especially with neighbour and Balkan countries, we are positive about Association Francophonique and any other international opportunity.

What are the members waiting from the next ECU board?

I can say what I am waiting from the next ECU board: it is time to make a step forward for the European chess. There were good periods and strong progress of the chess along the Europe – the spread level, increasing number of participants in continental and regional competitions, growing interest in a numerous countries, it is now the time that all these things should be much better developed by and through ECU. I do believe that our team has the right vision and expertise to put these into practice. According to discussions with many delegates and chess friends, they are waiting for a smooth cooperation across Europe and focusing of the Union’s energy on constructive objectives.

How is your team different from the other candidate teams?

We all are proud to be part of this team, we have a top level leader – Silvio Danailov, who has an excelent experience in the field of professional chess and who knows very well how chess is going on the other continents. I’d like to say that we represent the central option for the European chess, not only from the point of view of the geographical origin of the ticket members, but also because we are as close as to any continental regions. Starting from this position, we can work for a better cooperation between the national chess federations and for a better European Chess Union.

Now we are near to the final stage of the election campaigns. How these campaigns appear according to you?

Despite that everyone consider that the periods before the elections are in some way boring and full of unrealistic promises, one can see that the candidates are having some interesting strategies and projects.

Basically it is good that there are several candidates (at least two, I could say

) and all these energies will help finally to all of us to get closer to the real objectives and to a better ECU. The things for FIDE are more complicated and at a very large scale, the candidates are making great efforts and I hope that the winner will not need a long rest afterwards.

Mr. Ion-Serban Dobronauteanu is born in 1968. He has degrees from the Polytechnic University and the Academy of Economic Studies in Bucharest. Presently he studies PhD in agricultural economics. Speaks Romanian, English and French.

Ion-Serban Dobronauteanu is National Chess Master (ELO 2215). As a junior he was a member of rewarded teams at the National Team Championship.

Organizer of many Open Bucharest Tournament editions and numerous national chess events. Responsible for organizing and financing of Anatoli Karpov vs. Andrei Istratescu (2005) and Veselin Topalov vs. Dieter Nisipeanu (2006) matches.

Mr. Dobronauteanu is member of the Organizing Commitee of Kings Tournament-Bazna, Romania. President of the Romanian Chess Federation, January 2006-february 2010. Founding member, President and Vice-President (by rotation) of the Balkanic Chess Federation.

Ion-Serban Dobronauteanu is initiator of the Balkanic Chess Circuit “Grand Prix”. In present, Permanent Delegate to FRS at FIDE and ECU.