The press department of the Jermuk Grand Prix has provided several interviews for the official website. The conversation with Bulgarian Grandmaster Ivan Cheparinov is posted bellow.

Q: Ivan, this Grand Prix is dedicated to the 80th anniversary of Tigran Petrosian, and it would be very interesting to know your opinion of him.

A: Of course, Tigran Petrosian was a fascinating chess player. He was a world champion and that says it all. Besides positional play he was great in positions demanding deep calculation. It is surprising why he didn’t achieve victories in his games as often as one would expect. I guess there could be a special prize named after Tigran Petrosian, for the person who could draw the most frequently (smiling).

Q: But Tal’s playing style is closer to your heart.

A: My favorite chess players of all time are Fischer and also Kasparov. The latter is simply a legend. The other world champions were the strongest ones of their time, but unlike them Kasparov dominated the chess world for more than 20 years, eclipsing players spanning several generations.

A: I have never played in Mainz, and have only played some blitz games. Of course, it is also interesting, but it is another game altogether. The difference is enormous. Maybe there will be a time when chess as we know it will be exhausted. When that happens, we’ll play “FischerRandom chess”, but for now I enjoy and prefer chess as it is. 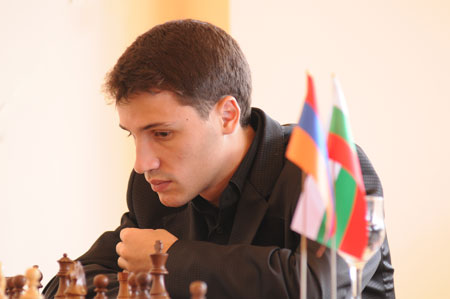 Q: Do you rely on the evaluations of chess engines?

A: Of course, very often I disagree with the evaluations. There are some positions when the computer makes a definitive judgment, but deep analysis proves simply the opposite . A vivid example can be seen in Topalov-Kramnik game played in Corus 2008, when Topalov played the knight sac 12. Nxf7!, but the computer didn’t recommend that move. Only after a long analysis did the computers recognize that the position is not so straightforward indeed.

Q: We are looking forward to the Anand-Topalov match. What prognosis do you have?

A: Yes, we’ll surely see an interesting and tough battle. While my opinion is possibly not objective, I think Topalov has great chances to win the match. I think it is obvious whom I’m going to support.

Q: Will you assist Topalov in that match?

A: That is still a secret.

Q: Is it easy for you to get into rhythm when starting a tournament? Are you nervous during the first game?

A: Almost always I start tournaments without much stress. In the past, before the start I used to get a little overexcited, but now I am more patient and let the first game begin in due course, with some excitement, to be sure. Sometimes, at the end of the tournament, I get exhausted and look forward to returning home.