By Eugenio Dessy for cagliariscacchi.com

From 22th to 26th June an International tournament took place in Torre delle Stelle, a beautiful seaside place in Sardinia (Italy). GM Jan Timman was one of the guest players and granted the following interview to Eugenio Dessy, the director of the organizer’s internet site www.cagliariscacchi.com. Photos by Danilo Mallò. Thanks also to SoloScacchi.net for kindly sending the material.

Q: Mr. Timman, first of all how did you find this place, Torre delle Stelle? Have you ever been in Sardinia?

A: I found everything beautiful. I came here one week in advance and the organization gave me a comfortable house just in front of the beach. This allowed me to go to the sea without failing to prepare the tournament.

I have never been in Sardinia before and I enjoyed it very much. Anyway, I have been in Italy several times, and not only for tournaments. My parents loved Tuscany and when I was a boy we spent there summer holidays for many years.

Q: And which tournaments did you play in Italy?

A: I remember Venice 1974, for example, when GM Liberzon won. I was 23 and when the tournament finished, I stayed some days more to visit the city, together with Italian GM Sergio Mariotti and American IM James Tarjan. We had a good together and it was nice to meet Mariotti here, in Torre delle Stelle, more than 30 years later.

I remember also Reggio Emilia 1984-85, a very strong tournament (Lajos Portisch was the winner) and more recently, in 2000, the European Championship in Saint Vincent, in Val D’Aosta, another beautiful Italian region. 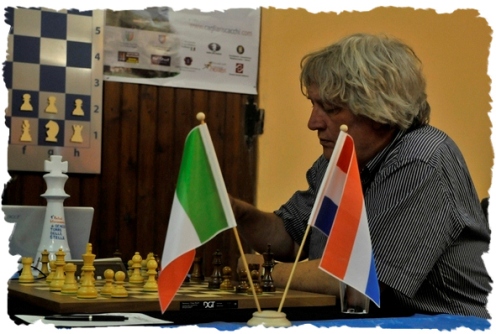 Q: What can you tell us about this tournament in Torre delle Stelle?

A: I’m quite satisfied with the third-fourth placement. Even if I strongly wanted to win, you must notice that this was a strong tournament, and moreover we had to play seven games in five days, with two double rounds, and I’m 59 years old. You may say that I’m not so old, but in such conditions young players are certainly the favourites. I hope that next year there will be a 9 rounds tournament with one game per day.

Q: We know this tournament was the first for you in 2011. What did you plan for the rest of the year?

A: From 19th to 28th July I will play the Dutch Open in Dieren, a 9-rounds open, and from 3rd to 11th September I will play another 9-rounds in Antwerp. Then I will probably stop for the rest of the year.

I usually play more tournaments but now I’m working on a book that needs some hard work.

Q: Can you tell us something about?

A: Yes, sure, it is a book about endgames, the title will be The Art of the Endgames. In the last years I developed a true passion for the endgames. Endgames are certainly more “scientific” than the middlegame, that’s more artistic and fascinating but is also harder (you need to spend a lot of energy in calculation) and this scientific dimension is very interesting.

Think about tablebases for example: the progress of software has allowed to solve all the endgames with six pieces, so we can study these endgames knowing that we have the right solution. It is also true, however, that software doesn’t explain us the “system” to reach the solution, it simply calculates very fast and gives us a series of moves, but human mind is different and needs to synthesize.

I will try to do that in the book, and I can also tell you that the Torre delle Stelle tournament will be mentioned, with some positions taken from the games played.

Q: When and how did you start playing chess?

A: I started when I was 8 years old. My father taught me, but he hadn’t much time to play because he worked a lot. He was a mathematician, but he loved the game. At home there were a lot of chess books, all bought by him, even if they were all written before the war, the newest were of 1938.

My older brother was fanatic for chess but when I began to beat him he didn’t like it and didn’t want to play anymore against me. So I began to go to the local chess club where I could play more but I was no fanatic in those first years. When I was 12 I played in a simultaneous game held by Max Euwe and I got a draw.

Q: I think that Max Euwe was (and is still) a legend in The Netherlands. Did you draw inspiration from him during those years?

A: Well, Euwe was really very much important for me but mostly for his human qualities. He was very close to my family because he was my mother’s professor of maths and when he understood that I could have had a future in chess he personally cared to find some financial help for me and managed to found the “Timman’s committee”, so I could study and take chess as a profession.

Q: Did someone train you in those years?

A: Yes, IM Hans Bowmeester started training me when I was 15. I went to him every Wednesday, in the afternoon, because in Dutch there are lessons at school only in the morning that day. He was very important for me, he appreciated a lot the games of Botvinnik and Smyslov and always showed and explained me all details.

I think he was the best master for me, he had a very good way of teaching because he was balanced, he taught well tactics, strategy, endgames and all sides of chess and I got improved much with him. 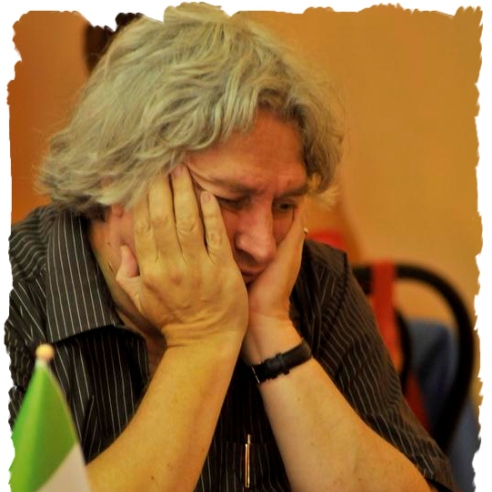 Q: Which is your favourite player?

A: It has always been Botvinnik, but going on I learned to appreciate many others, especially Fischer, and more recently Karpov and Kasparov of course. And also Smyslov.

Q: Is there, in Dutch nowadays, a “school” or something of the sort, to form young players?

A: No, there is not something really organized. Now we have only one player, Anish Giri, with possibilities to become a top ten.

Q: Your suggestions may be very useful to improve this state of things…

A: Well, but I think that first of all someone should ask me for that! In that case I would give some help with pleasure.

Q: And what do you think about young Italian players? You met some of them here in Torre delle Stelle.

A: I think they are good players. IM Luca Shitay will soon become a GM, I’m sure. Sabino Brunello is already GM and is always improving. They are two really strong positional players. Also Vocaturo, who wasn’t here, is strong. I think that the trend in Italy is promising with these young players.

Q: And what about Caruana?

A: Of course he’s the best Italian player, he’s a strong all-round player and has all the possibilities to become a top ten. Italian federation is rightly supporting him.

Q: Do you think chess has changed a lot since your golden years? Which suggestions would you give to a young player intentioned to raise his/her skill?

A: Sure chess has changed very much since ‘70s-‘80s. Of course computers had a lot of importance in those changes, but, in general, I don’t think that you can say that chess is now at a higher level. It is true that many opening lines have been improved and the endgames with six pieces were solved, but not always contemporary players show to play better than the past. I think that Spassky, for example, could still play now and be one of the strongest as well.

Q: Do you think physical training is important in chess?

A: At the highest level and in the long games and long matches it is certainly important. The most trained player of all was probably Kasparov, but he was even excessive in my opinion from that point of view: I always take long walks, also during tournaments. Long walks are good because they keep you in a good form and make you relax.

Q: Have you got a game of yours that you love particularly? An “immortal game”?

A: I love several of my attacking games, but my best game I think was the Karpov-Timman played in Mar del Plata 1982, when I played an excellent positional game.

Q: In conclusion, can you tell us something about your hobbies and/or interests?

A: I like music, of different kind, but mostly I love reading. I like the classics of Russian literature, above all Dostoyevsky and Tolstoy. I also love South-American literature, especially Borges, and I also wrote an essay about him. Other favourite writers are Kafka and, among Italian writers, Italo Svevo: he didn’t write many books but those few books were really excellent, like Confessions of Zeno.

Q: Thank you Mr. Timman for your kindness and we are waiting for you at the next Torre delle Stelle.

A: If you invite me again, I will certainly come.