Karjakin about the Russian citizenship, the Candidate matches, and Magnus Carlsen 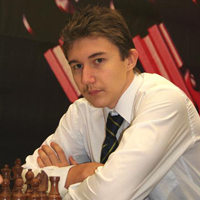 Sergey Karjakin is officially listed as a Russian player in the January FIDE rating list. He gives an extensive interview for segodnya.ua, where he talks about his absence from the World Team Championship, his expectations as a Russian player, the Candidate matches in Baku.

Karjakin also discusses his “rivalry” with Carlsen, against who he has to defend the title at Corus 2010

At the January FIDE rating list you are already listed as Russian. How did you feel when you receied the new chess citizenship?

It was a formality. Because I already have the citizenship of Russia, and lately I live in Moscow. So that nothing unexpected happened.

But this formality gives the right to play for Russia?

I would have played for Russia at the World Team Championship, but for some rules, I do not know by what, I still do not have the right to play for the Russians. I hope, I will play for the national team at the end of the year at the World Chess Olympiad 2010 in Khanty-Mansiysk.

How did guys from the Ukrainian team react to your move?

With a full understanding, because the situation in Ukraine is absolutely deplorable. Just an example, on 1st of January FIDE excluded for non-payment Ukraine from the World Federation rating list.

Where are you staying in Moscow?

Hard to get used to the rhythm of the metropolis after Simferopol?

It is hard, but I was always wanted to live in a big city. My wife is from Kiev, so she is used. But Moscow looks vast, even after Kiev.

There are some duties to the Federation of Russia?

There are no specific terms. Nobody can promise to be a world champion or win several supertournament in a row. But, on the other hand, they invested in me, and I have to justify the trust.

What do you think the fact that Kasparov takes care of the Norwegian Magnus Carlsen?Indeed, many believe that soon it Karjakin and Carlsen will play among themselves for the title of world champion?

I am sure, Magnus greatly benefits from the cooperation with Garry Kasparov. But I think more about yourself. I train with Kasparov’s coach Dokhonian and learned from him quite a lot. And about our rivalry with Magnus, it is journalistic invention. I do not think of Magnus as my principal rival.

Do you have a chance to get into Candidate matches tournament for the world championship 2011? Maybe, after moving to Russia, Ilyumzhinov will write to you as the main hope of Russian chess and will invite you?

I doubt very much I will participate in the Candidate matches tournament, the candidates are many. But if Ilyumzhinov gies a ticket, I will not refuse, and I will be very grateful to him. Meanwhile in front of me there is a goal to enter the top-10 world ranking.

Text of the interview: segodnya.ua