Performed during the 2010 Arad Open

The peaceful garden of the Coandi Hotel was the favourite evening destination for the participants of the 2010 Arad Open. Accompanied by Alin Campeanu, the restless organizer who prepared the event for 200 people all by himself, the players could relax in a quiet atmosphere after tough battles over the chess board.

On one of such occasions, I met Krikor Sevag Mekhitarian from Brazil, for whom Arad Open was the first event with GM tag next to his name. Only few days earlier Mekhitarian was awarded Grandmaster title at the FIDE Presidential Board in Tromso. A very friendly person, with contagious passion for chess and related stories, Mekhitarian kindly agreed to answer a couple of questions in the interview.

Chessdom: Hello Krikor, thank you for accepting the interview. First of all, congratulations on promotion to Grandmaster rank. How did you achieve this feat?

Krikor Sevag Mekhitarian: Hello, thank you. Well, I became International Master in 2005, and since then I’ve been trying hard, failing, and trying, and learning (chuckles), and then in 2009 I got my first GM norm in the Brazilian Chess Championship. Actually, I graduated from the University in the same period. For a couple of days, my routine was passing exams in the morning, then traveling to Americana to play in the Championship. In the end, it was a double celebration.

Then I earned the second GM norm in April this year at Open La Laguna, in Spain. The final third came here in Romania, at Eforie Nord Open. Since 2008 I already had 2500 elo, so this wasn’t a problem at all.

Chessdom: You earned the final norm in Eforie, Romania. Is that the reason why you came back to Romania and now playing in Arad Open?

Krikor Sevag Mekhitarian: Of course, it was a good tournament for me, the atmosphere was great, and I will always remember the place where I got the title. I think that after the first norm, the others came, I won’t say it’s easy, but it was natural, as it’s always the hardest part to get the first one, because it breaks that psychological barrier.

Now I am happy to be in Romania again. 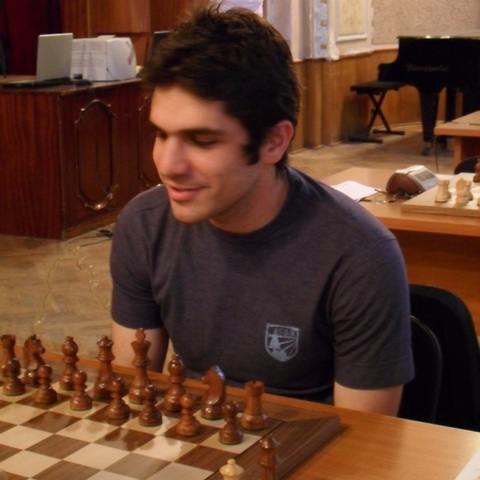 Krikor Sevag Mekhitarian before the 5th round in Arad

Chessdom: This year you are on a long tour around Europe.

Krikor Sevag Mekhitarian: Actually, I played in Spain and France on April, for about month and a half, then I went back to Brazil for about three weeks and came back to play in Spain, Netherlands and Romania.

Chessdom: How many tournaments in total? Are you tired?

Krikor Sevag Mekhitarian: Four, then two, now three more. I am not really tired, because we don’t get such strong tournaments in Brazil, and for me it’s always enjoyable to play. Even some tournaments, that by European standards are not very appealing to players, are very good for us. Sometimes I get a bit tired, but the excitement is high because I live quite far from here and then I simply enjoy.

Chessdom: What are your plans for the future, where will you play next?

Krikor Sevag Mekhitarian: I will play another tournament in Armenia, then I go back to Brazil, but already in September I will play the University World Championship in Switzerland. Then I hope to relax a bit and slowly prepare for the Brazil Championship, which is normally in December. I also have plans for Europe in January, February, I think I will play the Aeroflot Open, but still nothing clear yet.

Chessdom: Now that you became Grandmaster, the count of highest title holders in Brazil rose to 10. How is chess progressing in your country?

Krikor Sevag Mekhitarian: The initiative of some players to compete outside helps them a lot on their personal level and it motivates other people, the young and upcoming players, to do the same or fight harder to earn the norms and titles. But in general, the movement in Brazil is sort of the same as in recent years, no big changes in the tournaments, actually the same as for whole South America.

Krikor Sevag Mekhitarian: Maybe improving thanks to programs for chess in schools, I’d say the numbers are slowly growing, but the initiatives are still not strong as here in Europe. Mostly the players improve their level and progress on their own merits. 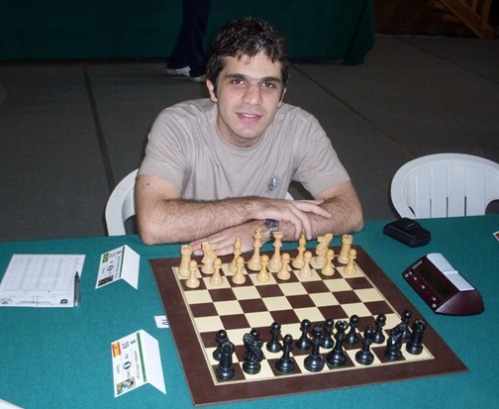 Chessdom: Vassily Ivanchuk, one of the world’s top and most favoured players, recently played in Brazil. How important was his visit for your chess community?

Krikor Sevag Mekhitarian: Something like that doesn’t happen very often, and it was very good because many people wanted to see the elite player. It was wonderful for the atmosphere, to see him playing there, and maybe that will motivate other organizers to try and make something similar. Of course we know it’s not easy to bring someone of Ivanchuk’s caliber to a different continent, but if we have another visit of a top player this year, next year, maybe the sponsors could open their eyes.

Chessdom: It was during this tournament that I discovered that you’re actually running a blog. If I remember well, I’ve read on your blog that after each game Ivanchuk took a walk to the forest, in isolation. Is that correct?

Krikor Sevag Mekhitarian: Yeah, I think I wrote something like that, but there was also another blog that covered the tournament, so maybe you’ve seen it there.

It was a two-day rapid tournament and the time control was changing, from 15 minutes in the first round to 60 minutes for the last game, because the opposition was becoming stronger in the later stages – it is a very interesting concept.

In the first day, Ivanchuk was quite serious, ok I mean, before the tournament he was very polite with everyone, posing for photos and giving autographs. But during the play, on the first day we had five round, he was very very serious, after each game he wanted to be alone, no matter what.

On the last round of the first day he lost to GM Gilberto Milos, which was a huge disaster for him, of course he can lose to Milos, he had black pieces, but he appeared to be a little upset.

On the second day he won all the games, he was the champion, and after the tournament he was relaxed again, talking to everybody, went to dinner with us…

Clearly the tension is very high during the games and he shows that he is very professional, he didn’t want to interact much while concentrating on play. 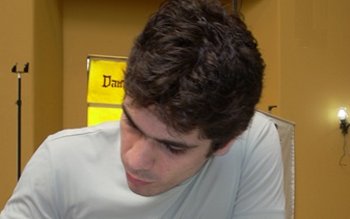 Krikor Sevag Mekhitarian: Most likely when I am in tournament yes. After each round I try to write something, with some short analysis of the game.

Chessdom: Do you receive feedback from the readers?

Krikor Sevag Mekhitarian: Yes, lots, mostly in comments, sometimes an email. Occasionally some people write me, it’s quite funny – “I think in your game yesterday you made a big mistake, you had a better move!” (laughing)

Chessdom: How many visitors, in average?

Krikor Sevag Mekhitarian: Yeah, that’s quite a lot for a blog, I think, specially in Brazil.