Following his victory against Evgeny Tomashevsky 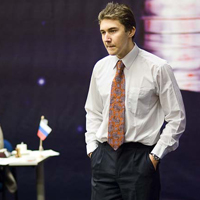 In the 2008 Chess Olympiad Sergey Karjakin played the 2nd board for Ukraine and narrowly lost a team medal in the final round. In the meantime, soon after winning the 2009 Corus tournament, Karjakin moved to Moscow and obtained Russian citizenship. At the 39th Chess Olympiad in Khanty-Mansiysk he is representing Russia.

Being in excellent form, he is the striking force of the Russia 1 team, having collected 5.5 points from six games. In the 7th round his victory against Evgeny Tomashevsky was decisive for the positive result in the match against the very strong Russia 2 team.

In round 8, Russia 1 is set to match Karjakin’s former country – Ukraine. Bellow is an interview given for the Olympiad official website.

- Your game decided the match. Did you feel nervous?

- No, I was calm. Just did my job. We played the Ruy Lopez, and I didn’t get any significant advantage out of the opening. There was a lot of maneuvering, and the game was fairly balanced, but I didn’t want to take a draw, because the position was full of life. And at some point I found an interesting attacking possibility…

- This was probably the turning point of the game. Do you agree that Tomashevsky started looking uncomfortable after that?

- Yes, your observation seems to be correct. He started blundering, and I used it well.

- At the end when Tomashevsky was about to resign, you suddenly sunk into thought for a long time.

- The game was too important, so I tried to calculate everything flawlessly. I didn’t want to spoil the effort. I developed a mating attack, but the material was even, and if Black defended, I’d have serious problems.

- The first team won – is this a fair result?

- I think so. You have to admit that our team is a little bit stronger.

- Of course! I noticed that Grischuk and Svidler had better positions. Peter played very aggressively was close to a win, but Vitiugov managed to hold.

- Have they congratulated you on this victory already?

- Your former team, Ukraine, is leading after 7 rounds. Do you feel any regrets about changing the citizenship?

- Not at all. I have excellent relations with the Ukrainian players, but I’ll forget about friendship tomorrow – this match may determine the Olympiad winner. It will be a great fight! And I hope Russia wins.

- Are you sure that you’ll play in the match?

- It will be decided before the match at the team meeting. But I am in an excellent form, I feel great and really want to play.

- How do you like working with the best Russian grandmasters?

- Everything is just fine. We support each other, and everybody is ready to share their ideas. I feel the integrity of the team. Working in such atmosphere is a great pleasure.

- What can you say about the organization of the Olympiad?

- Everything is superb. I was in Khanty-Mansiysk before, and the main problem was frosty weather. There is no such a problem now, so I cannot complain about anything.