Interview with the Russian newspaper Sport-Express

The ECU President Silvio Danailov is currently on a mini tour, visiting Cyprus, Georgia and Azerbaijan. Following the news about Georgian interest in hosting the European Individual Women Championship, the Russian newspaper “Sport-Express” contacted Danailov for an interview which could reveal more detail.

“Having received a serious offer from Tbilisi, I came here to discuss the bid with the Mayor of Tbilisi, who heads the organizing committee, and with the Minister of Sports and Youth Affairs of Georgia. I saw a great interest, the proposed venue in the five-star Sheraton Hotel meets all international standards, and if Georgia wins the tender, I have no doubt that the European Championship will be held at the highest level.” – Danailov explained.

He also added that 100.000 EUR is the minimum amount that is being considered for the prize fund, and that perhaps it will be even increased. 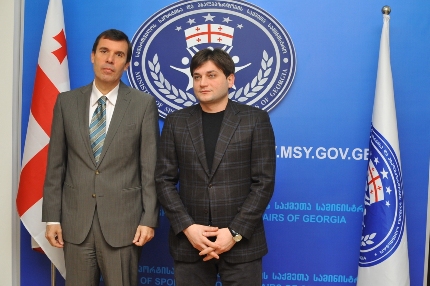 The next topic was “How do you assess the chances of Topalov in the Candidates matches in Kazan?”. Danailov responded that “Veselin is currently undertaking a very serious preparation. If he will be ready like prior to the match with Anand, then he will be one of the favourites. I hope in Kazan we will see the good old Topalov!”

Another interesting question was about the changes that Danailov will try to pursue as the President of the ECU: “We have to change a few things. First we have to introduce the Sofia rule into all official competitions. And in the case of intentional triple repetition in a position where you can still fight, the arbiter should have the right to ‘award’ both players with ‘zero’.”

“Second, we have to introduce the football scoring system, which is being used with great effect in Bilbao and London. And finally, we must reduce the time control, the game should last no more than four hours. All kinds of increments should be canceled because they rob the fans off of a spectacular show in the time trouble.”

Full article (Russian), thanks to e3e5.com