There are only a few days left to the 2009 edition of Mtel Masters. It is the 4th tournament from the Grand Slam (after Nanjing, Corus, and Linares) and it will be a category 21 event.

The construction of the glass cube – video from May 2008

Mr Danailov, the Mtel Masters starts in a few days, how is the preparation going?

Everything is going smoothly, thank you. The glass pavilion will be installed on the beautiful square in front of the National Theatre Ivan Vazov, in the heart of Sofia. This is our strongest tournament ever, FIDE category 21. The participants are world class players : Veselin Topalov, Magnus Carlsen, Vassily Ivanchuk (winner of last year), Wang Yue, Lenier Dominguez, and Alexey Shirov. More information you can find on our official site where the live games will be. We are looking forward to a really big chess show!

You mentioned live games, will other sites be permitted to retransmit the moves? We remember what happened with Chessbase during Topalov-Kamsky, how is the copyright issue standing now?

We have no problems with Chessbase in general, we have problems with one person there, who is trying to damage our reputation for years. What this person is doing is unforgiven.

Anyway, the copyrights have nothing to do with this. These guys want to use our products for free and then to sell them to their clients and to charge them. This should stop, and not only for Chessbase, also for everybody else who is using our products without permission. To organize a big event cost a lot of effort and money, so if somebody wants to use the results of this work he should sign a contract with the organizers and pay for the copyrights. This is the normal way in every professional sport like football, tennis, golf, basketball, etc. If chess wants to become real professional sport this is the only way to follow.

The Anand – Topalov match is going to take place next year, but there is already much media attention towards it. Anand will participate in the Presidents Cup and the match Azerbaijan vs The World, where he will also receive the Chess Oscar.

Topalov was also invited for Baku, but unfortunately we had to refuse the invitation. The reason was that we have other commitments with our sponsors in Bulgaria in the same period.

The Chess Oscar award does not surprise me at all, after Elista 2006 is very difficult to imagine that Veselin will get any award from Russia. This is typical political decision, otherwise they will probably close the “64″ magazine.

Look, for every person with common sense it is obvious that Topalov had by far the best results in 2008. He won the strongest tournaments in Bilbao and Nanjing and he is number one in the World ratings with big margin. The biggest result of Vishy was to beat the player number six in the world in the World Championship match. Great achievement, of course, but not enough to win the Oscar.

FIDE has published the bidding procedure regarding the WCC match Anand – Topalov in 2010. Is Bulgaria going to submit a bid?

We don’t know yet, but it is possible. I will have several meetings with our sponsors during MTel Masters and then we are going to decide to present a bid or not. However, we are looking for serious price fund, nothing compared to the last match in Bonn. The price fund of such a big historical match should be at least three million euro. 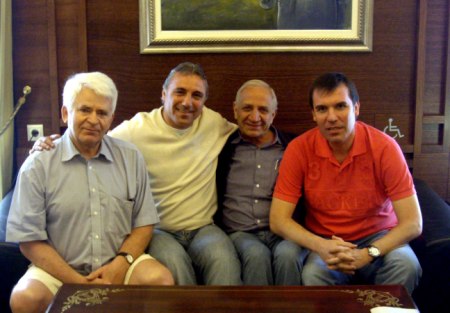