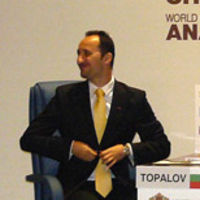 A few days ago Times of India published exclusive interview with Topalov about the World Championship match in Sofia. At the same time Anand’s reply was published by Indian media, Veselin Topalov contacted Chessdom.com sending the full text of the interview, large parts of which have not been published by TOI.

1. How tough was the World Championship match against Anand?

Physically the match was not so difficult. 12 games are not so many and there were many rest days. KO format is much tougher in this sense.Mentally of course, the tension was very high,but it is also true that top chess players are used to pressure.

2. What are your afterthoughts on game 12 and your misadventure?

Well, I was not happy for a 6-6 tie against the World Champion things are not so bad. Of course, in the rapid games Anand would have been the favorite, but mainly I missed my chances in games 3, 5 and 10, where I was close to the win.

3. According to some reports, it seems Anand was helped by Kasparov, Kramnik and Carlsen for the match. Your comments please.

I do not think Anand should be very proud of this. Especially by the fact he accepted help from the first two. I am between the chess elite already for 15 years and perfectly remember how Kasparov treated Anand for years. And not long before World Championship match in Bonn 2008 Anand had to stand the arrogant statements of his opponent in the press. I would never accept help from persons who humiliated me during years even for free. But it seems Anand is different.

4. Does the above-mentioned help indicate that the players respect Anand and want him to do well. Or is this the case of they ganging against you because of unproved Toiletgate allegations thrown at Kramnik?

Actually I also received help during the match by grandmasters whose names I will not mention, as I plan to work with them in the future in secret. Clearly, they wanted me to win, so I do not complain about luck of supporters. As for the allegations during the Toiletgate, in fact they were quite founded. Simply the Organizers do not publish the dozens of hours of video-recordings from the match. Even FIDE does not have access to them and my delegation was not allowed to make copies. Only this says enough about the Organizers there. And the behavior of my opponent is similar to of an sportsman who had destroyed his doping test, but claims it is not relevant, because it was negative anyway.

5. Do you fear that during the Challenger tournament remaining seven players could gang-up against you and make your task of winning the event that much difficult?

As far as I know, the 8 players will decide the next Challenger in direct matches not a tournament. Also, believe me, nobody from us is friend with all the others.

6. Do you think you have got enough recognition for your stance of not accepting draws and making the game uncompromising and far more entertaining?

Yes, I think so. Since the Sofia rules were invented by my manager Silvio Danailov back in 2005 the results are very positive. Sponsors liked them and new tournaments appeared. Media interest to chess has grown and prizes increased. For winning the World Title in 2005 I received 300 000 USD and five years later Anand got 1.2M euro for winning the match in Sofia. This speaks for itself.

7. Do you think Anand is the most complete player because ha has won the World title in all formats: tournament in your absence, KO in 2000 and matchplay against Kramnik and you?

Yes, that is something no one can deny. Also, he has been a Rapid World Champion, very strong in a blitz play and one of the best blindfold players in the world.

8. What are your thoughts on Anand who has retained his World title twice?

I think the World Champion in chess has a great responsibility. He has to collaborate with FIDE and attract new sponsors to chess. But Anand does not have a professional team behind him and he fails to find sponsorship. India could be a paradise for chess, but the fact he has not played a single tournament game in his own country since 2002 can only mean two things: either Anand does not like to play in India, or his team is not capable to stage a top level event. In both cases this is very bad for the chess as a professional sport. 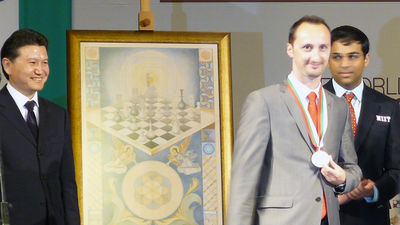 The text above is the full interview that Veselin Topalov has sent to Times of India, without any changes. To the part published in TOI, Aruna and Anand already replied, as reported by Times Now. The full text follows. 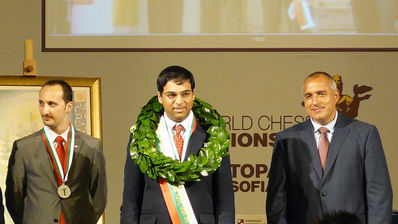 World Chess Champion Vishwanathan Anand’s camp has hit back at Veselin Topolov for his comments slamming Anand for taking help from Gary Kasparov and Vladimir Kramnik. Speaking exclusively to TIMES NOW, Anand’s wife Aruna Anand on Wednesday (May 26) said that Topalov is trying to intimidate them and that they are not bothered by such allegations.

She said, “We never really gave attention to what he said before I don’t think we are going to give attention to him now. I don’t know what his reasons are but till now we have just kept silent to whatever has been the provocation from his side. They think they are trying to intimidate us, but I think by making these allegations his is also showing his weakness quite openly.”

The Bulgarian also mentioned that he would never accept help from people who humiliated him for years but said Anand may be different.

He said, “I do not think Anand should be very proud of this. I remember how Kasparov treated Anand for years. And not long before the World Championship match in Bonn 2008, Anand had to stand the arrogant statements of his opponent in the press. I would never accept help from people who humiliated me for years even for free. But it seems Anand is different.”