Vladimir Georgiev is the coach of Antoaneta Stefanova 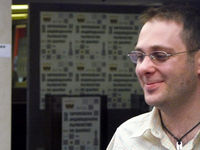 Vladimir Georgiev at EICC during a
conversation with Chessdom journalists

Interview by WIM Anna Burtasova after round 1 of North Urals Cup.

- Vladimir today Antoaneta played black with the rating-leader of the tournament. What instructions did you give before the match?

V.: Antoaneta plays all matches with the intention to win and it doesn’t matter whether she plays white or black and no matter with whom she plays. The same was with this match.

- But after the drawing procedure during the opening ceremony it seemed that Antoaneta was not so satisfied that she had to play black one more match when she got the 6th number.

V.: Yes, of course she was a bit upset. However to play black is a little more difficult. But I can say that in my opinion she plays black even better than white. Today’s match confirmed it.

- Did she manage to use the prepared variant in this match?

V.: We examined the variant that happened in the match. But the great attention we paid to variants that appeared in games of the Indian player more often. That is why we can say that it was she who surprised us in the opening. But later she lost assurance and began to think too long. Most likely she chose this position because there is one match in which white won confidently. But Antoaneta doesn’t have to play the same way.

- Vladimir, is it so difficult to be the coach of women?

В.: To be the coach is not so easy. The most important is trust and mutual understanding. It is exactly what we have with Antoaneta. Even if I give her some instructions just before the game she will follow it. In general I think that there are not so many talented coaches in the world. Chess players of post soviet countries have some advantage; there are more serious specialists here.

- Do you train somebody apart from Stefanova?

V.: I worked as a coach in America. But at that time Antoaneta lost 100 points of her rating. I decided to come back to Europe and now I train only her. She managed to get the rating back and I think we will have the success. We will go together to the World Championship that starts in August in Nalchik.

V.: It seems to me that there is a connection here. Active chess player has also active way of life. And who prefers quiet life without risks plays chess the same way.