Wolfgang Kögler is CEO of the ORDIX AG, 16 year sponsor of the Chess Classic Mainz and the company giving the Rapid Open its name. A successful cooperation, which will again bring hundreds of chessplayers from 27th July to 3rd August to Mainz to visit the Chess Classic and to play in the ORDIX Open, the world’s biggest and strongest chess tournament, which will take place 1st and 2nd August. Harry Schaack spoke with the businessman about parallels between chess and business, commitment, service and a high class product.

HARRY SCHAACK: Mr. Kögler, allow me to start with a somewhat provocative question: We are in the middle of one of the most difficult financial crises of the last hundred years, yet ORDIX continues to support the Chess Classic in Mainz, the world’s biggest and strongest open chess tournament. Do you have too much money?

WOLFGANG KÖGLER: No, definitely not. But one year ago I promised to support the tournament and I will keep this promise. Today, I would probably decide somewhat differently.

Q: ORDIX is an independent software and consulting company, which offers service, training, and products such as relational databases for UNIX, Linux and Windows. Has the IT business been spared from the crisis?

A: The crisis first of all affected the motor industry and its suppliers and the machine building industry. We happen to have only few contacts to these fields. Unlike others we are thus fortunately not that much affected. Our order situation is still okay. If I wanted to be heretical, I might add: because we work for banks, which were bailed out by the government. And the banks do not stop their IT-projects, because these projects are too important.

Q: But the climate has changed.

A: That’s right. But this development began a couple of years ago. It has nothing to do with the crisis. A while ago you could still rely on handshake-agreements, but nowadays even contracts are not always kept or they are „improved“ afterwards.

Q: A couple of months ago World Champion Vishy Anand was invited to the World Economic Forum in Davos to talk with leading scientists and other authorities about economics. Where do you see similarities between chess, economics or your field?

A: One should not take the comparison too far. But competitive sports – and I think chess is one – and economics do indeed have things in common. To successfully lead a company is a kind of competitive sport. Chess focuses on the individual, but in a company things depend on teamwork. Even though a strong personality at the top is not bad, in a company interaction is more important.

Q: Can business learn something from chess?

A: Well, I wished some managers would think as much as chessplayers (laughs). 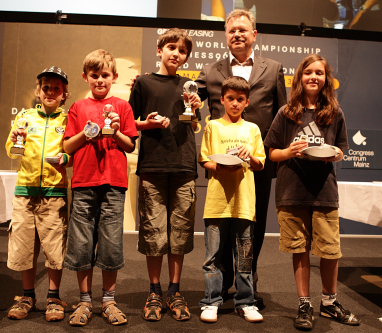 Q: You have been supporting the ORDIX Open since 1994, for 16 years your company has been an established part of the Chess Classic. You are the only sponsor who supported the tournament from the very start. Which connection do you see between sponsoring and consistency?

A: In general, consistency is something which distinguishes us. In the work with our customers we are very steady, which in itself signalizes reliability. This approach to our work obviously is reflected in our long term support of the ORDIX Open. Short term commitments are not what we are looking for.

Q: You saw the continuous growth of the event. With 762 participants the ORDIX Open 2007 was the world’s biggest open tournament ever. What does this success mean to you?

A: Such things make you happy. I do not know whether there’s potential for further growth. However, this is not the primary goal of our sponsoring. It is a huge tournament, people from many countries come to Mainz and all over the world people hear about the ORDIX Open. That is fantastic, but this success is not only due to the money we give, but also due to the efforts of the Chess Tigers team organizing the event. The joy of the volunteers transpires to the entire event.

Q: In contrast to patronage, sponsoring is an investment for which a company expects some value in return. What did ORDIX get from the Chess Classic?

A: We did not have a concrete, measurable benefit. However, our support is pretty clear and straightforward and this is no absolute must. We wanted to establish a brand and to make the name of ORDIX better known in an environment, in which not only IT-people move. We hope that maybe the one or the other wants to find out more about ORDIX and about what our company does. Which in turn might yield results.

Q: Your commitment as sponsor mainly focuses on minority sports …

A: Yes. I like to give money to fields, where I feel my contribution might change something. For me, it is more satisfying to get a direct feedback from the person I gave the money to. And I can more easily see what is done with it. In minority sports I can also more easily support amateur sport and junior sport, which are dear to me.

Q: Recently, you even increased your support for the Chess Classic. This year will be the third, in which you support the Mini-ORDIX Open.

A: When Hans-Walter Schmitt asked, whether I would like to support the Mini-Open as well, I immediately agreed. He just hit a nerve. I always look forward to this tournament.

Q: By now, the world’s best players come to Mainz to play in the ORDIX Open. As prizes are scaled, even relatively weak players can win unusually high prizes in their rating-class. How do you see the relation between amateurs and professionals?

A: It is good that we offer something for everyone. But the top level chess is necessary to attract the many others. I think every amateur is happy to have an opportunity to play against the top players. 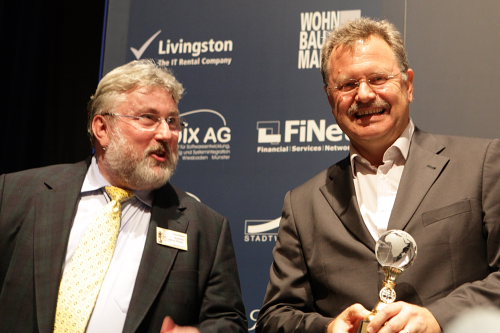 Q: Does this ratio of mass and class work in business?

A: While there is a good ratio of professionals and amateurs in the ORDIX there are too many amateurs in business. The „class“ should actually have prevented a crisis such as we have now. Unfortunately, too many just look for short term profit.

Q: You are a regular visitor of the Gourmet Club of the Chess Classic. Do you also invite your customers to this club?

A: Yes, for instance last year. I like it there: the rooms are dignified, grandmasters explain the games in entertaining fashion, and there is good food and good wine.

Q: You also play chess yourself, even though you have little time for it. Did you ever play in a club?

A: No, I never did. At university I used to play regularly for some time. I know the rules and if a commentator explains the characteristics of the position I can even follow the high-class games well. The computer evaluations, now common at the Chess Classic, also help a lot.

Q: An important aspect of your work is customer orientation. If you look at the Chess Classic: what does service mean in chess?

A: The Chess Classic is a great event. It offers so much. Not only to chessplayers but to whole families. You can leave the „little ones“ in the children’s club where a number of educators take care of them. This allows you to focus on the games. The Gourmet Club is also to my taste, because I like good food.

Another advantage of this festival might be that the games reach their crucial point quickly and you thus see a lot of highlights. This is certainly very attractive for visitors. The Chess Classic is a quick-decision-event – another parallel to our IT-business. In IT, slow people won’t get far.

Q: Are you also interested in top level chess apart from the Chess Classic?

A: I am generally interested in sports and I follow the top chess events, last year, for instance, the World Championship in Bonn or the Olympiad in Dresden.

Q: Do you have personal contacts to the top players who regularly play in Mainz?

A: Yes, but only in connection to the Chess Classic. 16 years ago Hans-Walter Schmitt introduced Vishy Anand to me and said that this one could really go far. To be honest, at that time I was rather skeptical. However, I see things differently now (laughs).

At the opening ceremony, the Champions Diner, I once sat at a table with Vladimir Kramnik and we had a very entertaining conversation. I enjoy contact with the top players on such occasions.

Q: How do you and the ORDIX staff follow the Open?

A: One or two members of our staff played in the Open and in the simultaneous event. They were rather taken with it. We also publish regular reports on our website.

Q: You know the Chess Classic from the very beginning. This successful festival is also a business product, which has adapted to changed times and circumstances. What do you think distinguishes this product? And what were the most important innovations of the tournament?

A: The most important innovation was to move from Frankfurt to Mainz. The ambience of the Rheingoldhalle by far surpasses everything the tournament had in Frankfurt. Since then the event had a fixed place and surrounding. This was not the case in Frankfurt. I think this is good for the whole event. Being close to the Rhine and downtown Mainz is also attractive. I would even say: if the event had not moved to Mainz, it might no longer exist by now.

Q: You mainly started to sponsor the Chess Classic because the organizer Hans-Walter Schmitt had been a long time acquaintance of you. What is the secret of a 16 year long cooperation?

A: It simply worked. Two people, who others might occasionally be somewhat uncomfortable with, met. The chemistry between us was simply right.

Q: If you look back to the 16 years: what were your personal highlights?

A: A personal highlight was the winning ceremony of the Mini-ORDIX Open, where I gave the prizes to the winners. It was moving to see how the sometimes very small children stumbled on stage.

Moreover, I think it’s satisfying that we increased our value for the event over the years. We have never been the biggest sponsor. But some other sponsors no longer exist today or they quickly stopped their commitment because they had no long-term concept.

Thank you very much for the interview.