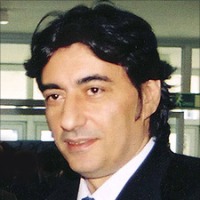 For a week the Chessdom.com journalists are in Sofia reporting on all events around the championship. After the initial sparkles with the volcano situation, all seems to be coming back to normal. The latest details and the position of the World Chess Federation were given by the FIDE Deputy President Georgios Makropoulos.

Good afternoon Mr. Makropoulos, Anand is still not in Sofia. We have an official statement from the Bulgarian Chess Federation and the organizers, some news from Anand and the AICF, a few words from Aruna for the Indian media, what is the position of FIDE?

What happened is known to everybody. The volcano in Iceland erupted, a lot of airports are having problems, a lot of flights are cancelled. Sofia is also one of those airports that partly has problem. We have late arrivals not only with Anand, but also of officials of FIDE for the Presidential board and for the match – the second arbiter is not here, the members of the appeals committee are not here as well, we do not know yet exactly when they are going to arrive. We are giving instructions and helping everyone with how to move and what transportation to take if airports are closed. For example, to fly to either Thessaloniki or Istanbul and drive from there. We are not sure if the FIDE President himself will arrive.

Two days ago we received a letter from Viswanathan Anand, asking a postponement of 3 days because he cannot arrive on time. Now, it is clear that here we’re facing a force majeure situation. Of course, based on the agreement we have signed, all sides should do their best here to solve this problem, FIDE, the organizers, Anand should also try to come up with other transportation. He is actually on his way by car, as far as I know.

Is this information confirmed?

From what I know they have already left to Sofia, so we are expecting them probably Tuesday early in the morning or in the afternoon. He has the responsibility to be here. Of course, we understand that this creates big problems for his preparation because in such matches you need to be there several days before the start. You cannot just go the day before and start playing. You come with your people, you start to adjust to the conditions, and you try to be organized in order to play the match. I understand this very well, he needs several days, therefore in the contract it says that he can come 7 days before (last Friday). And he was preparing to come last Friday via Madrid – Frankfurt – Sofia flight. He could not get the connection from Frankfurt because it was cancelled.

I believe we have very good understanding, with all sides helping resolve the situation. Sergiev is very cooperative, Danailov as well, Aruna and Anand too. Everybody understands and cooperates. They see the problems of the other side. The one of Anand is obvious, this is force majeure. But on the other side, to postpone the match for three days will create very big problems for the organizers because they already have their contracts with TV, people that are involved with the organization, hotels, transportation agencies and they have already published the brochures and posters, the original schedule is everywhere. The politicians and everyone who want to attend the opening ceremony or will come for the first move of the first round, knows the schedule, they have arranged their time, so everybody will be forced to make radical changes if we go for postponement. All of us understand very well what is going on and we have good communication.

What is important for me is that the Chairman of the OC, The Prime Minister Mr. Boiko Borisov, should be informed about the situation. He was not here today, he’s coming later tonight. I already asked for a meeting with Mr. Borisov, if possible, to explain the situation at hand and the official position of FIDE. I am really very optimistic that we will solve the problems in a way that everybody will be satisfied. 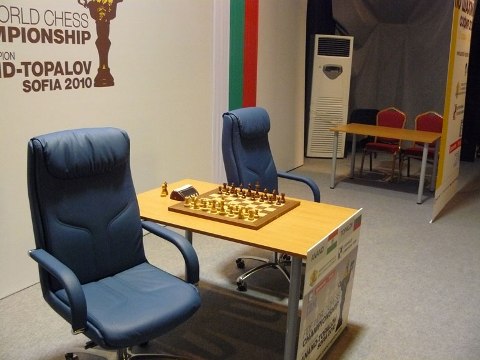 How do you see the organization itself, the venue, and the details around the World Chess Championship 2010?

I can see that there is a great effort of the Organizing Committee to organize a championship of a very high level. I have seen the preparation for months now, I was before here for another inspection. I came here many days ago to follow the preparation and the last details. I believe that we are not going to face any problem and that everything will be ready for the first game. Both sides and the players will be satisfied, as will be the public.

So in general you give a positive grade and you say that Sofia is ready for the WCC as a host?

Yes, I believe it is ready, of course I can say that the final inspection was supposed to be on the 18th of April (the day before). Yesterday the playing hall was not ready and people were still working in the rooms. But I am not worried, I know about such events and I believe that at the end everything will be ready on time.

FIDE flag, flag of India, and the Bulgarian flag are there… Especially for FIDE branding there were two solutions. One was to be FIDE logo, a big fide logo, and the second to be in the title, “FIDE World Championship”, which is the case here. So there is the FIDE name in the title. 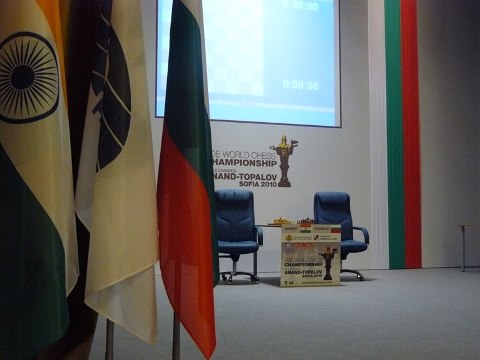 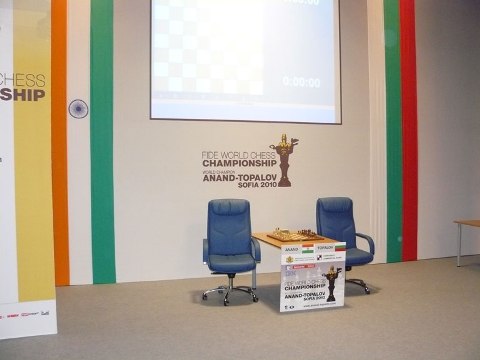 All World Chess Championships are considered a quality jump for chess, and this one has the highest prize fund. Do you expect it to have higher effect on chess in general?

You know, the fact that we had such a generous offer from Bulgaria is already good for chess. The next organizer of the World Chess Championship 2012 has to meet the same financial standards. So, as you probably know, FIDE has already awarded an option to London to host the next World Championship Match, we have even got the financial guarantee. They feel secure that the money can be guaranteed for London 2012 for the prize fund and the other conditions. I believe that by the end of May, beginning of June we will sign the contract for the next match with the same financial standards. Which means that the offer from Bulgaria is pushing the current financial level of the WCC matches on a very high standard.

This championship, if it happens in London, will coincide with the Olympics.

This is the main idea, to connect the championship with the parallel events that will be organized in London for the Olympic Games. This is very important for chess.

Stay tuned for the second part of the interview with the FIDE Deputy President Georgious Makropoulos as well as information, interviews, and photos from the venue. The only thing that we will not be provided is interviews with Anand team, as Mr. Hans-Walter Schmitt (who is representing the team from India), is politely declining interviews and statements. We respect Anand’s wish to maintain privacy before the match start.